When it comes to hitting the ball farther, a lot of golfers realize that technique is important. In recent years, the larger golfing public is also beginning to recognize the importance of getting custom fit for their driver in order to maximize driving distance and their overall average golf swing speed.

However, there’s another way to get more distance that most people, even tour players, don’t even know about (and how easy it is to do) or realize is possible… swing speed training. Now, I’ll talk about swing speed training and how you can increase your swing speed later on down the page, but to start, let’s simply gets started discussing swing speed in general.

First of all, how important is your average golf swing speed?

Simply put, the more swing speed you have, the farther you’ll hit the ball.

Take a look at this chart of the average swing speeds for various categories of golfers. 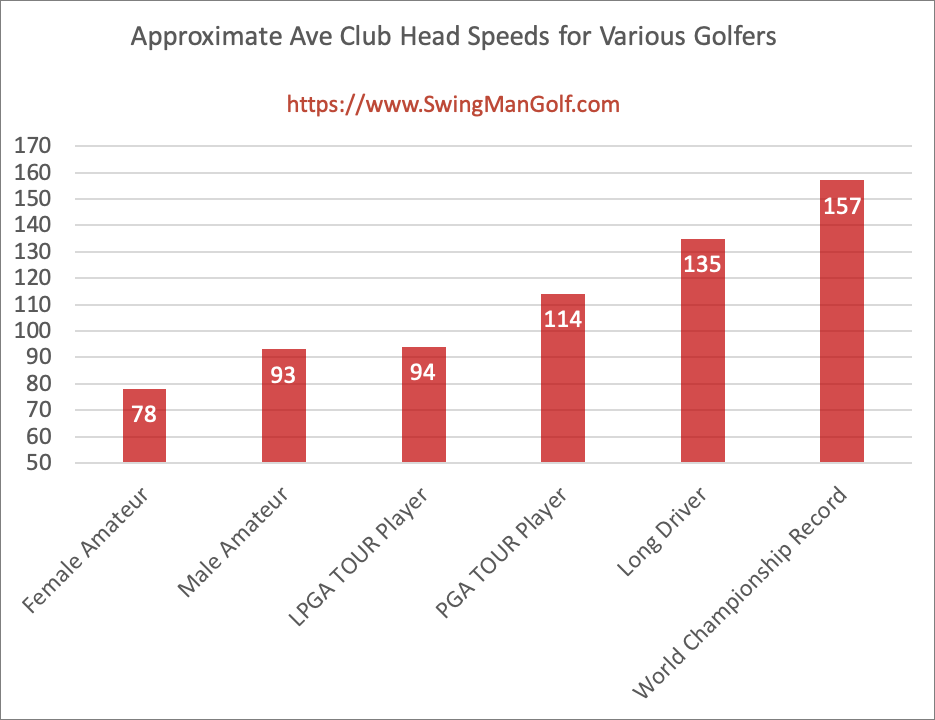 Here’s a little more detail to illustrate the correlation between driving distance and swing speed. 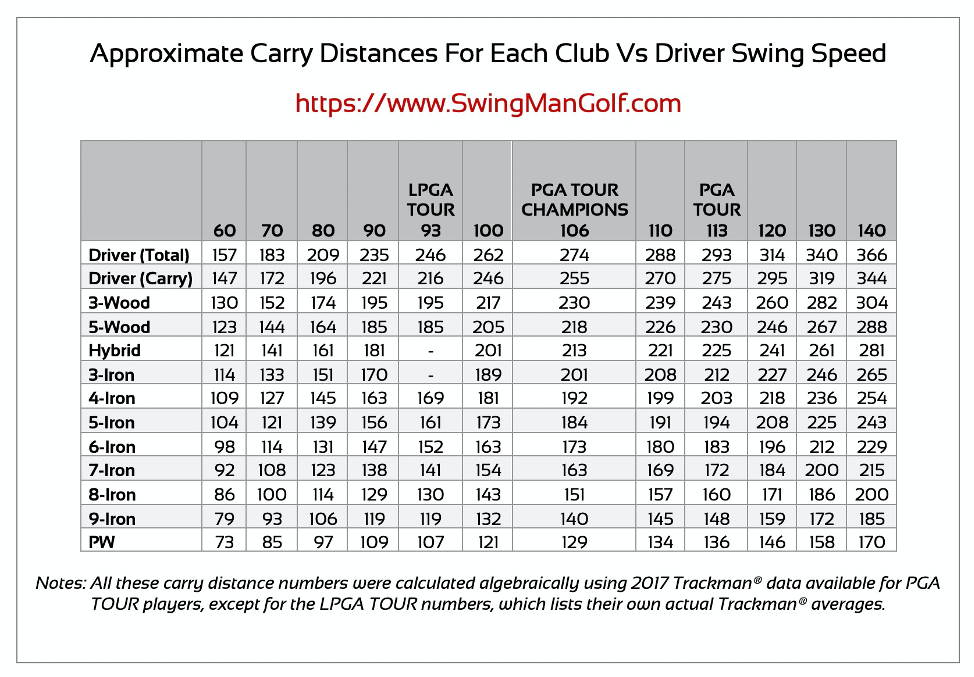 Not only does more swing speed help you hit the ball farther, research shows there is a direct correlation between your driving distance (and club head speed) and handicap (and thus scoring).

You can see this in 2017-2019 Arccos data published by MyGolfSpy in 2020 that shows the difference in driving distance by handicap group.

Trackman® research also shows that there is a direct correlation between your club head speed and your handicap (and thus scoring). 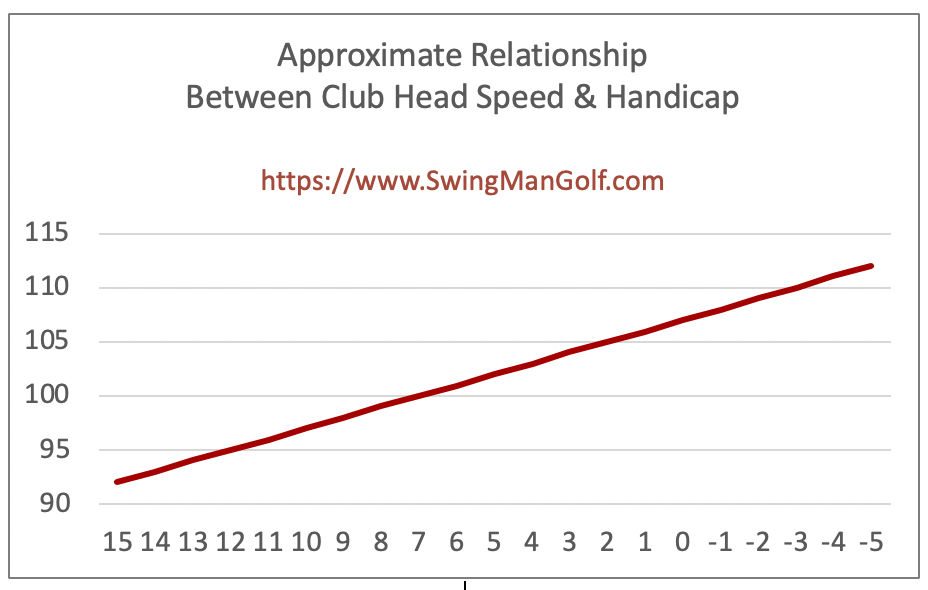 So, basically, although swing technique, ball striking, and equipment fitting are all important to distance and scoring…simply put, if you want to be a longer or better player or both, you must also have more swing speed.

Let’s drill down and take a look at some other club head speed numbers.

How Fast Is An Amateur’s Average Golf Swing Speed?

Regarding male amateurs, since 2005, the United States Golf Association (USGA) reports that the average handicap has been between 14 and 15. Golf Handicap and Information Network (GHIN) shows similar numbers of 15.3 handicap in 2003 and 14.3 handicap in 2012.

We estimate the average amateur women run in the region of 78 mph and 167-yard drives. Some women we’ve seen are in the mid to high 40s.

How Fast Is A Tour Player’s Average Golf Swing Speed?

Since 2007, the PGA TOUR has been tracking golf swing speeds of all of its players, also using Trackman®.

As of the end of the 2019-2020 PGA TOUR season, the tour average runs about 114.1 mph and they hit about 296.4 yards/drive, which means their driving efficiency is about 2.60 yards/drive. This is much better than the average 14-15 –handicap golfer who comes in at 2.29 yards/drive. If you think about it, this makes sense because professionals hit the ball more consistently around the sweet spot.

Tom Stickney has done some impact testing for GolfWRX. Here’s what a tour player’s striking pattern looked like after about 10 shots. 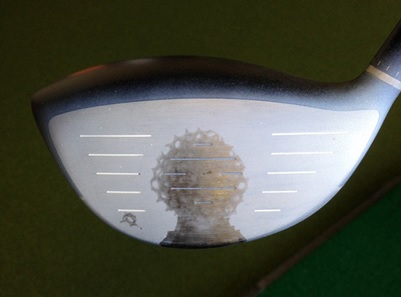 Compare that to the impact dispersion after only 5 shots from the 15-handicap golfer he tested. 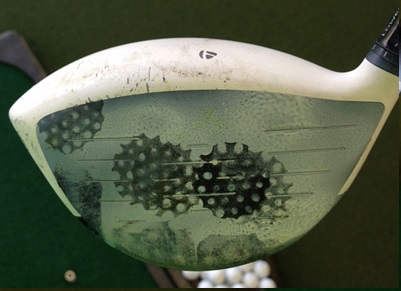 That means the average amateur could pick up over 25 yards simply from more consistent strikes. 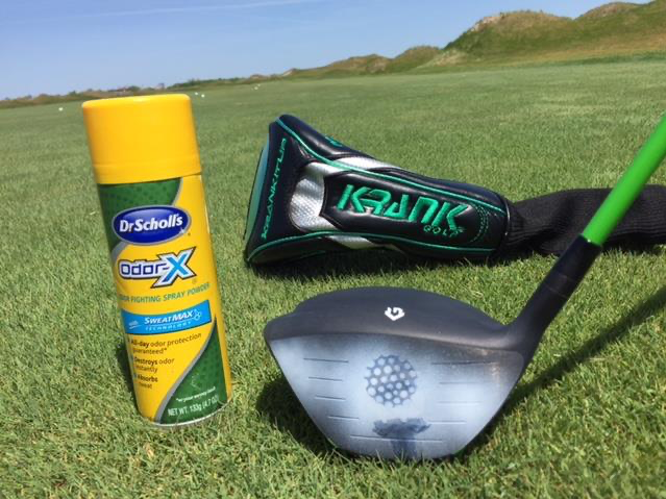 QUICK TIP:If you want to a relatively inexpensive and pretty easy way to work on your contact, practice on the driving range with a little foot powder spray. It wipes off easily with a towel and you can see where the ball struck the club face.

Anyway, here is a selection of the swing speeds for the 2019-2020 season for some of the slowest PGA TOUR Players. These guys are definitely at a disadvantage on tour speed-wise.

If only they knew it didn’t have to be that way!

Next are the guys who are considered to be in the middle of the pack as far as swing speed goes on the PGA TOUR. These guys aren’t hurting for speed, but they could definitely use more.

Lastly are the guys with the fastest speeds. These guys definitely swing fast by TOUR standards. But as we’ll see in a moment, they are actually still quite slow relative to the competitors in the World Long Drive Championships.

At the moment, the European Tour doesn’t post average club head speeds for the tour. However, we did come across a document from a single event in 2008 containing the swing speed of each player in the field. We’re not sure which hole or event these were measured with using Flightscope, but the numbers were interesting.

The event average was 111 mph, which is more or less what we see on the PGA TOUR.

What is your average golf swing speed? Where would you rank on the PGA TOUR? And what Swing Speed could you achieve?

With Swing Man Golf’s Swing Speed Training, based on your gender, age, handicap and average driving distance, how far could you be driving it?

Use this tool to find out:

How fast are LPGA Tour players?

Trackman® also reports LPGA TOUR players average around 94 mph, which according to the LPGA yields about 248 yards/drive. That’s 2.64 yards/mph of swing speed.

Interestingly, LPGA TOUR players swing about as fast as the average amateur male. However, they are even more efficient drivers of the golf ball than PGA TOUR players. This is because they do not hit down on their drives as much as PGA TOUR players and their launch conditions are more optimal for their individual club head speed. PGA TOUR players basically hit the ball too low and with too much spin to be as optimal as the ladies on the LPGA TOUR.

We don’t have any specific numbers for the ladies but based on their driving distances and the 2.64-yards/mph average driving efficiency numbers from Trackman®, here are some estimated swing speed numbers for a few LPGA Tour players.

It’s our belief that LPGA Tour players could actually be competitive on men’s professional tours provided they work on getting faster through a swing speed training like we have here at Swing Man Golf through All-Access.

The slowest player on the PGA TOUR each year is always close to 104-105 mph. Based on that, for any LPGA Tour player (for example, Michelle Wie) to be competitive in a male event, she would need more speed.

When Annika Sorenstam was invited to play in the PGA TOUR’s Bank of America Colonial tournament, she averaged almost 270 yards/drive that year…which would put her at about 102 mph. She nearly made the cut and even beat some of the men in the field. It would have been interesting to know how well she would have done had she been 10 mph faster…which is certainly doable.

How fast are the swing speeds at the World Long Drive Championships? 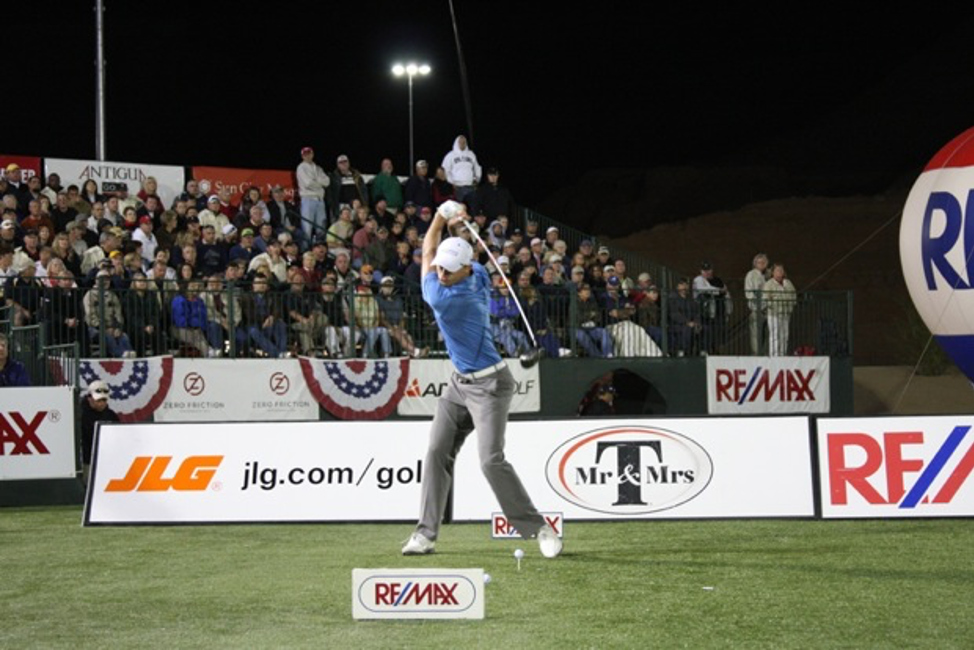 At the Professional Long Driver level, Trackman® shows us the following average club head speed numbers for the field at the World Long Drive Championships is about 135 mph.

That means that a typical long driver is over 10 mph faster on average than the PGA TOUR’s fastest swinger. Some people consider guys like Bubba Watson, Dustin Johnson, Tiger Woods, Rory McIlroy, etc., long hitters. Indeed, relative to amateurs they are long. However, in comparison to a professional long driver, no player on the PGA TOUR would stand a chance of winning (or even being competitive) at the World Long Drive Championships.

Look at how fast a typical Final-8 long driver can swing.

Here are some average speeds of a few individual Final-8 competitors.

A champion long driver would easily drive it 50 yards past a guy like Bubba Watson. In fact, this actually happened in Hawaii a few years ago ahead of the PGA TOUR event when Jamie Sadlowski hit drives at Kapalua in Maui against Bubba Watson, Dustin Johnson, and Robert Garrigus.

Occasionally, you’ll see guys get in to the Final-8 at the World Championships that average in the 130s. Typically when that happens, they are better fit for their equipment, they are more mentally strong, they take better advantage of wind conditions, and things like that. As you can see, it’s very difficult to win swinging in the 130s, though.

If memory serves, Carl Wolter won the 2011 World Championships in the high 130s. That year there were very strong tail winds and Carl presumably hit a better wind ball (usually higher and with more spin) than two other champions he beat head-to-head, Jamie Sadlowski and Joe Miller…both of whom have swung 150 mph in competition.

So, as you can see, the more swing speed you have, in general the farther you will drive the ball…and as I’ve shown, more distance also makes it easier to shoot lower scores.

Can you Increase Your Average Golf Swing Speed?

Aside from improving your technique and getting fit for your equipment, despite what many golfers (even pros like Tiger) believe, yes, you can actually train to increase your swing speed…at any age!

Just consider a long drive guy like Bobby Wilson. At the age of 53, he could swing over 12 mph faster than the PGA TOUR’s “long hitting” Bubba Watson.

Also note that just because you are fit does not mean you are fast. Camilo Villegas is arguably more “fit” than John Daly, but John swings about 4 mph faster. Granted, some of this is due to John’s technique, equipment, etc…but the point is that although fitness certainly has its place in golf and life, for distance and application towards becoming a better player…it’s more about being fast than fit.

Rapidly and drastically unleash your power and play consistently with a steady and reliable game with Swing Man Golfs All-Access…featuring effective and easy-to-understand world class golf instruction paired with our expertise in long drive and our pioneering golf fitness swing speed training programs for amateurs and pros alike.

We’ve got junior golfers from 12 years old to men on up in to their 80s with handicaps ranging from pro to 30+ who add an average of 12-16 mph (30-40 yards) of driver swing speed in their first month of basic training. Believe it or not, we’ve even had several golfers who were willing to do the work that gained over 30 and 40 mph (that’s not a typo) over the course of a few months.

One of these golfers was 58 years old!

Get a taste of what’s available in All-Access with this video about a week-long swing speed training workout you can do at home!