Background: In late 2002, Jaacob Bowden was successfully working in the mid-west corporate world as a 26-year-old computer engineer.  Feeling disenchanted with his work, Jaacob quit his job, took his savings, and moved out to California to pursue a golf career, despite only being an average length hitting 14-handicap golfer.  As luck would have it, he was taken under the wing of Dan Shauger and Guinness World Record Long Driver Mike Austin.  Only 5 months later, Jaacob won the Pinnacle Distance Challenge with a televised drive of 381-yards beating out over 160 competitors including the current 2008 RE/MAX World Long Drive Senior Division Champion, Dan Boever.  Jaacob went on to hit a venue record 421-yard drive to win a World Championship Qualifier, make multiple cuts in professional tour events around the world with rounds in the 60s and 70s, and finish 5th in the Speedgolf World Championships.

Jaacob, it was a pretty risky move you made giving up your stability to pursue a sport while you were only an average amateur player. Why did you make that decision and what made you think that you would have a chance of making it as a professional? 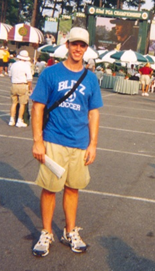 I have always had aspirations – a dream if you will – to be a professional athlete.  But at that point in my life I figured it was pretty well too late for that dream to come true.  However, I was growing disenchanted with my work and was looking for a change.  So I made myself a list of things to do or to pursue in life.  One of those things was to attend every major sports event at least once – one Super Bowl, one World Series, one NBA Finals, etc.  When I flew to Atlanta for work, the 2002 PGA Championship happened to be in town at the Atlanta Athletic Club, and I decided to go.  While walking around on the tournament course, I suddenly felt a jolt of energy and sense of being alive that I hadn’t felt for a long time.  Something told me that I had what…

Read the rest of what Casey has to say in the September 2014 Monthly Handicap Improver here:
https://www.swingmangolf.com/register.php