Is Iron Technology Improving or are the Golf Club Companies Just Making the Lofts Lower?

There is no question that the past 30 years has seen a significant decrease in the loft angles of irons in the golf equipment industry. So much that one has to question the motives of the companies in doing so.

While some companies try to say that the advances in irons with lower centers of gravity or other performance related technologies has been a reason for this, in truth the huge decrease in iron lofts has been done to entice golfers into buying a new set of irons because they can hit the ball farther with the same number iron than before. Changes in iron head technology do not merit a change of 8 degrees in loft.

In short, the lofts of today’s irons are on average two full clubs lower than they were in the 1980s. So that means today’s 5-iron has a loft equivalent to the 3-iron of 30 years ago. And the same is true with all the other irons in the set. But don’t take my word for it. Here’s a chart that outlines the evolution of what I have referred to as “shrinking loft disease.”

Evolution of Loft Angles on Irons 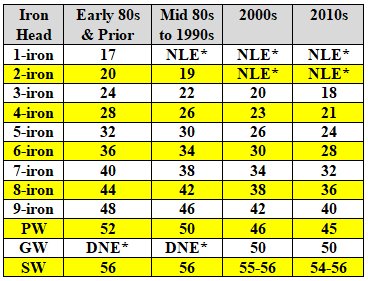 DNE – Did Not Exist
NLE – No Longer Exists

But it is what it is because every golf equipment company has been forced to follow with this trend toward lower loft irons. I say “forced to follow the trend” because when the first companies began to lower…

Read the rest of what Tom has to say about Is Iron Technology Improving or are the Golf Club Companies Just Making the Lofts Lower in the May 2015 Monthly Handicap Improver here:
https://www.swingmangolf.com/register.php