In 1994, Hall, Domingues and Cavazos conducted a study with baseball players testing the effects of either BLOCK or RANDOM practice schedules on subsequent LEARNING. Thirty players were tested for skill levels, and then were randomly assigned to one of three groups: 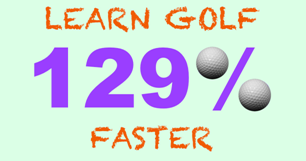 During the extra practice sessions, Random and Block practice groups received 45 pitches – a mixture of fastballs, curveballs and change-up pitches. Although the groups received the same number of extra pitches, they were either given each type of pitch 15 times in a row before moving on to the next one(Block), or each type of pitch was received in a random fashion (random), E.g. 1 fastball, one curveball, one fastball, one change-up pitch.

After 6 weeks of practicing in…

Read the rest of what Adam has to say about Learn Golf 129% Faster in the August 2018 Monthly Handicap Improver here:
https://www.swingmangolf.com/register.php