Lessons from a 25-Year Career In Golf: My 4 Best Golf Tips 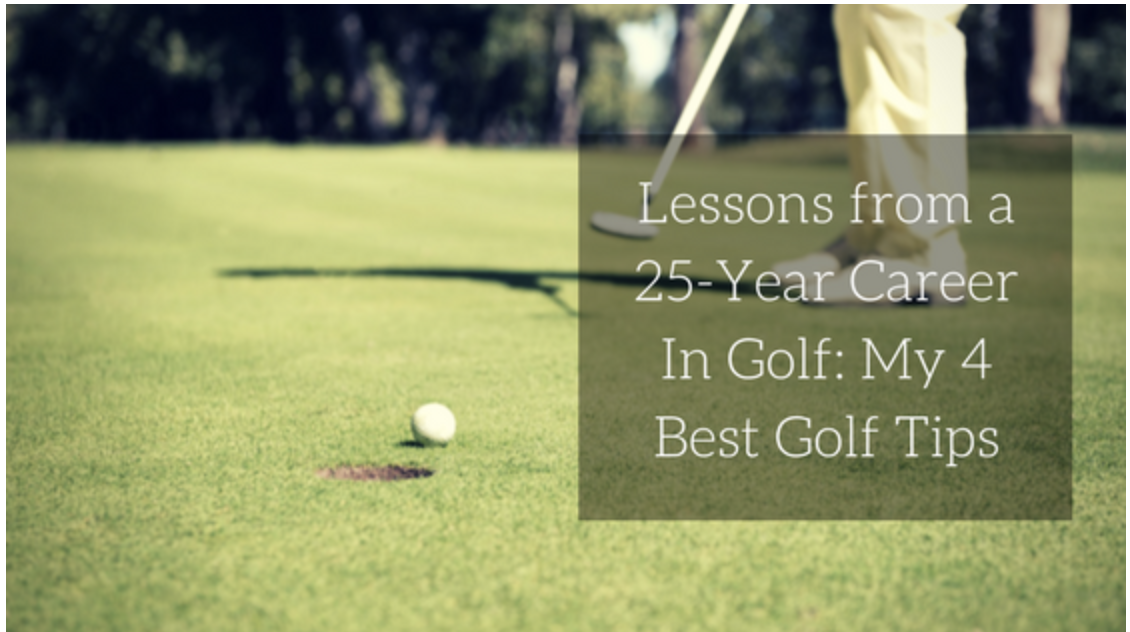 2018 marked my 25th year of my golf career. I was lucky enough to start playing the game when I was 15 (double lucky, since I also met my wife that same year). I decided to join a golf club in Omaha, Nebraska in my 20s, and that is where I learned to play professionally, and where I met many wonderful players.

That’s when I also found my passion to teach golf (and thankfully, I just happened to have a knack for it), and I’m proud to say I have taught many amazing golfers with great success.

During these 25 years, I was always asked about the best tips and tricks. Needless to say, it is simply not an easy task. The game of golf is very broad, and there are a virtually unlimited amount of things to learn. Yet, after I thought carefully about this, here I want to share four of the best tips I’ve learned over the years.

Although there are many different factors that can make or break your iron shots, there are two most common, yet fatal mistakes done by many golfers, especially beginners.

First, many golfers tend to swing the arms too far backward in the backswing, in a misguided attempt to create more power. This mistake sacrifices too much of control and distance, and will, in the end, produce mis-hits. Second, many of us tend to put the takeaway too low, and so delaying a proper hinging of the wrists, and so the swing won’t produce enough power.

To fix these two common issues, here is a simple drill you can follow:

• First is your stance. Make sure to make a 45-degree angle between your shaft and your left arm. The key to this whole drill is that your wrists must be angled 90-degrees during the backswing for a proper hinge, and this stance will ensure you are already hinged halfway.
• During the takeaway, the key is to get your left thumb pointing at the right shoulder as soon as possible. Keep your hands close to the ground while attempting to move the clubhead up as fast as possible.
• You’ll know you’ve made the right angle with your wrists when your left arm is perfectly parallel to the ground, yet the shaft is perpendicular to it. This way, you set your wrists much earlier during the backswing, and you won’t need to swing the arms too far in the top of your swing.

Jim Hardy, a former Tour player and also one of the most renowned golf instructors in the U.S., popularized the concept of two different swings: one-plane and two-plane. His concept is actually pretty useful, and so I’ve also adapted it to my own coaching. Understanding the two different types, picking the right one for you and optimizing it can really improve your swing significantly. So, let us first learn the difference between the two.
The Two-Plane Swing

It is easier to first understand the two-plane swing, which is characterized with two different movements during the backswing: the arms move in a vertical, upright ‘plane’, while the shoulders are rotating in a more horizontal plane, hence the name. Typically, a two-planer tend to set up with a more upright spine with a stance closer to the ball. So, the key here is that the arms swing independently of the rotation of the body.
The One-Plane Swing

On the other hand, one-plane swing golfers swing their arms onto roughly the same plane as the shoulders and the rest of the body. Typically, the spine is relatively bent at the address or bent over during the swing motion.

So, how should you pick your swing type? Try both, and find out which one you are more comfortable with. If possible, test your performances with both types. Once you’ve found the right one for you, stick with it and improve upon it.

While it is fairly obvious that we shouldn’t fight the wind to get more distance, there is another common mistake made by many golfers: when swinging downwind, we should swing easier instead of harder.

Why? Because when we swing too hard into the wind, we will generate more backspin and higher flight trajectory, thus sacrificing distance.

The easy fix? Move slightly backward from your usual position, around an inch or so, and move your center of gravity a little lower by bending your knees a little. Swing at roughly 75% of your power. Here is an easy drill to help you:

• Tee the ball an inch higher than usual.
• Step a little further, roughly an inch backward compared to your normal stance
• Focus on accuracy, and swing with 70-75% of your power.
• Be patient and don’t focus on swinging harder.

4. Learn From Others As Much As You Can

Back in 2013, Tiger Woods was taking putting advice from Steve Stricker, and Woods’ putting performances have significantly improved since then.

The catch? If Tiger Woods can still learn something from others, certainly can we! Remember that 2013 was arguably one of Woods’ best years, in which he was crowned with the PGA Tour Player of The Year award. Did Stricker’s lessons help him achieve that accolade? Quite possibly.

In my earlier days in Arizona, can’t remember exactly but I guess it was the mid-90s, I also remembered how my friend, a fellow club member pointed out how I often grip too tightly, especially when I was trying to gain more distance. Even today, I still remember that advice when I am gripping the club.

There are other lessons and advice I’ve taken over the years, some improved my game, some didn’t. In my opinion, there are two keys to maximize how you learn from others:

First, you need to understand yourself as a golfer objectively. Know your strengths, your playstyle, your weaknesses, and your tendencies. Be honest with yourself, don’t overestimate and don’t underestimate. Second, based on that knowledge, filter out the advice, tips, and lessons you get. Again, be honest and objective.

Also, always strive to know (and play with) better players. Get out of your comfort zone. You won’t improve much if you are only playing with close friends where you are the best of the bunch.

There are obviously many more things you can learn to improve your game. However, I personally believe these four will be helpful for most golfers across various skill levels (including senior players). If you have any question or suggestion, please don’t hesitate to leave it in the comment section below, and stay tuned for more tips from me, Jordan Fuller.