Perhaps you’ve seen clips of a clinic where mike austin, the man who hit a guinness record 515-yard drive in the 1974 us national senior open, is teaching a group of PGA teaching pros. 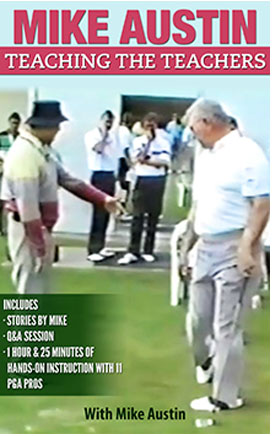 In the video clips, Austin is shown working with several different PGA Pros for several minutes each to get them swinging in the manner in which he is prescribing in order to hit the long ball.

Interestingly, some people that have watched the clips have commented how they seem to learn more from watching Mike mold and manipulate each of their swings as opposed to watching a regular instructional type video because not only is he instructing them in a live setting but it’s also almost as valuable to see what he doesn’t want them to do and how he gets them to go from Point A to Point B…mistakes and all.

Well, Swing Man Golf is very excited to announce that the Austin estate has recently digitized a full length version of the 2 hours and 47 seconds of raw footage from the clinic.

Here’s what you’ll see in “Mike Austin Teaching the Teachers”.

First, the video starts off indoors with about 6 minutes of story telling…followed by about 29 minutes going over the swing basics which include the shift (or body action), the hand action, and the combination of the pivot and hand action.

Also sprinkled throughout is a bit of Q&A covering things like the grip, hand action, foot position, balance, motion, swing plane, squatting, club head speed (Mike was measured once measured at 133 mph but said he used to be up around 160 mph when he was younger), etc.

Second, the group moves outdoors where Mike proceeds to instruct 11 different students from anywhere to 1-15 minutes each…totalling about 1 hour and 25 minutes of hand-on work out on the range.

Now if you’ve ever heard anything about Mike, you should be prepared for a bit of yelling, cussing, and possibly offensive language.

But as you’ll see, he get’s things done.

“I’m mean as hell to my students but I get results.”
“You can’t build the Eiffel Tower in a day. You’re working with wild animals when you’re working with nerves. It’s through repetitious practice that you’re able to develop a trained reflex.”

You should also be aware that there is approximately 15 minutes or so out on the range where the audio cuts out. None-the-less, you can still tell what is going on by watching. In that sense, it may even be just as valuable watching that section with out the sound.

To get access to the “Mike Austin Teaching the Teachers” video, click on the “Buy Now” button below.

And, When You Get Access By Sunday, February 05 2023 You’ll Also
Receive: 5 Special All-Access Bonuses! 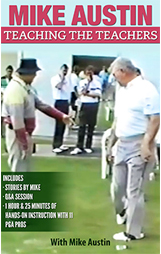