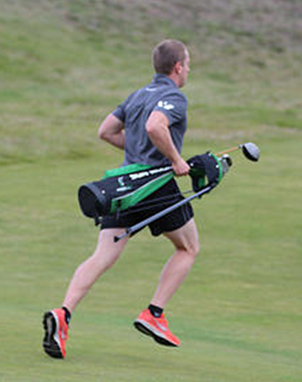 How did you first get involved in speedgolf?

I read about the guys in Oregon and Cali (mainly Tim Scott, Christopher Smith, Jay Larson) playing speedgolf and I instantly realized that this was something that would suit me.

What clubs do you have in your bag?

Why did you pick out those particular clubs?

They leave no real gap in my game, obviously there is a big jump from Hybrid up to 7-iron but I am comfortable hitting baby hybrids or hitting big aggressive seven irons to hit the required yardage.

With that few of clubs, there of course would be shots that are between full swing distances. How do you like to play those? 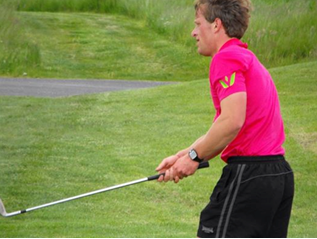 Using the example of the 7-iron, I would favor aiming right for a longer shot, square for a ‘standard’ length shot and left for a shorter one, the way my body and hands react to these setups with that particular club usually yield the desired results. See my YouTube video for a demonstration of this.

Using the example of the 9-iron I would use more the feeling of shorter arm swings to shorten distances.

I have always noticed throughout my life that I have putted just as well or sometimes better in practice using one hand instead of two. When I realized it was within the rules of golf to hold your bag while putting it was a no brainer for me considering the amount of time that is saved logistically. Check out my ‘Hogan Handed’ style here.

Based on what you’ve learned from speedgolf, what advice or drills that you could give the regular golfer for them to apply to their normal golf game?

Play speedgolf. You will realize that you are a much better a player than you realized and you will truly learn what it feels like to stay in the present.

Practice short irons with a short…

Read the rest of what Rob has to say about Speedgolf in the October 2014 Monthly Handicap Improver here:
https://www.swingmangolf.com/register.php