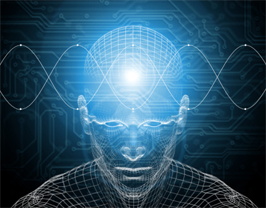 If you’ve been around sports and golf for any length of time, you probably understand the importance of the mental game.

I can personally attest to this in my journey from 14-handicapper to Professional Golfer…especially as I got to a point where I was trying to shave off those last few strokes.

In the beginning I got pretty far with better technique, more practice, equipment that was fit to my swing, etc, but to get those last few strokes off my game it really helped me to put a lot of time in to improving how I thought, understanding more of how my brain worked, getting better control of my emotions, etc…both on and off the course. Throughout my journey I’ve been to a number of personal growth seminars, worked with a mental coach, read quite a few books about the mental game, etc.

As luck would have it, in 2005 I was introduced by a mutual colleague to a guy named Peter who was running a company called BrainSpeak. Brainspeak and his Whole Brain Learning Institute (WBLI) publish transformational audio programs with their state-of-the-art sound and subliminal technology using a team of world-class sound technologists, Grammy-nominated componsers, behavioral scientists, physiologists, micro-electronics specialists, and other consultants.

After talking with Peter on the phone, I learned that in the early 90s they had actually developed an audio program specifically tailored to golf and had tested it with great success. The program was tested on 17 players from the PGA Tour (4), LPGA Tour (6), Senior Tour (3), and other Tours (4).

Take a look at the improvement:

They also did some collegiate testing on a woman’s golf team. Prior to starting the program the team scoring average was 321.08. The subsequent season they averaged 313.03 breaking team records for individual and cumulative scoring. 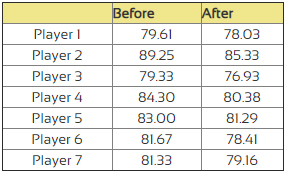 Their normal amateur testing group of 6 people dropped their handicaps by 3.7 strokes per round.

Unfortunately, the entire project got shelved for awhile as other things took priority for BrainSpeak and WBLI. Luckily, when I spoke to Peter he was interested in resurrecting things and he let me try the golf brain CDs out.

Wouldn’t you know it, shortly after I started I shot my first tournament round of golf in the 60s!

Over the next few years, Peter and I both got busy and things with the project got put to the back burner again. I went through phases of using and not using the program (not surprisingly my game was better when I was more disciplined about incorporating it in to my practice). However, I think we always knew we wanted to do something together and recently I’m glad to say we finally got everything kickstarted again. Lucky for everyone, here we are!

I suppose technology has also played a role in getting the ball rolling again…at least for me. In the beginning, the program was on audio cassette tapes. When I met Peter in 2005, things had evolved to CDs. Recently, the technology has finally become good enough that it can be offered in a high quality downloadable format without them being monster-sized files. This makes things easier for me to manage from a customer service standpoint considering my travel schedule, overall costs for everyone can be lowered, plus as an end consumer you can get started right away.

How does the technology work?

Peter might be better at explaining this in simple terms than me, but I’ll give it a go.

The universe as a whole is more or less a big energy field. Since your brain emmits measurable frequencies, you consequently can attract and repel various things and experiences in the universe that are on the same or different wavelengths. Perhaps you know of someone who always seems to get good or bad breaks, has any easy or difficult time with money, etc. This is the law of attraction at work.

Audio books like Rhonda Byrne’s “The Secret” or the movie “What the Bleep” are based around this whole idea of the law of attraction. The kicker (and what a lot of people don’t realize) is that it’s not as simple as just positive conscious thinking, rather it’s the vibration that is emmitting from you from a subconscious level that is what’s helping shape your experience. 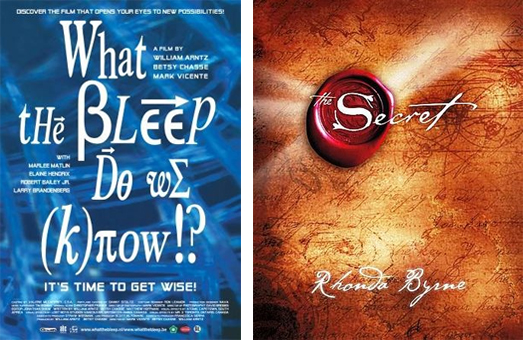 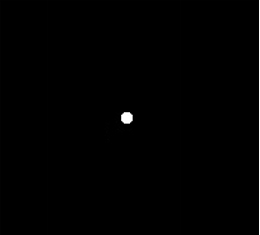 My mental coach once told me of a story of how her teacher faxed her an entirely blacked-out sheet of paper except for one small white dot where the ink didn’t print. Her teacher told her that the vibrational affect of her conscious brain was the white part…the subconcious brain was the dark part. Hehe, she was upset about the ink usage, but she got the point. Positive thinking won’t necessarily do much good if your deeper and underlying subconcious beliefs contradict what you are “positively” thinking.

For example, it might be easy to consciously SAY you want to win a golf tournament. But do you REALLY want to on a subconscious level? Maybe you perceive winning to be dangerous, maybe you are afraid of standing out, maybe you don’t feel deserving or worthy, or whatever else.

Adam Scott bogeyed the last 4 holes of the 2012 British Open to lose by 1. Personally, I don’t think he lost from some problem with his physical skills. Rather, I think it was something going on subconsiously for him. Perhaps if that was cleared up, he would’ve manifested a different experience…a putt would’ve dropped, he would’ve gotten a better kick, he may have chosen a different club off the tee on 18, etc. 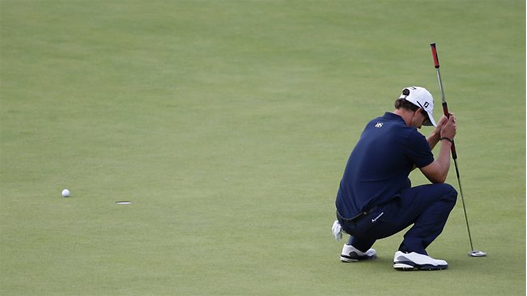 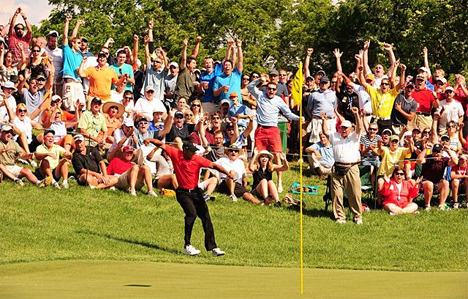 Like him or not, that’s one thing I admire about guys like Tiger. In general, he is subconciously more “okay” with winning and the spotlight than his competitors.

Unfortunately, it can be a bit tricky to operate on yourself on a subconcious level. It takes courage to honestly look at yourself on a deeper level. You may have to deal with some uncomfortable past situation that has shaped you as a person, you may need to change something that you believe at your core, and even if you have some knowledge of how to do this…you still may need to ask for help.

That’s where this audio program comes in.

What they have found at Brainspeak is that by listening to certain 3-dimensional (it’s cool how they figured out how to make you percieve the sounds are coming from in front of you, above you, behind you, etc) audible and non-audible (subliminal) sounds like Tibetan bells, music, natural sounds, tones, affirmations, etc, the sound vibrations can help “tune” your brain frequency to one that is conducive towards getting you what you “say” you want and anchoring new and positive thought and belief patterns.

What would I have to do?

Basically, all you have to do is to listen to the 3-audio tracks each day. While you listen you can meditate, visualize, just listen to the sounds, or any combination of these things.

The first one is pretty much a general tune up. It’s 12 minutes and 9 seconds long, 17.4 MB, and you listen to it first.

Basically, between the two you’re looking at about 30 minutes of audio. It’s best to listen to these when you are in a quiet space and aren’t doing anything else. Although, sometimes I’ll put them in my iPod Nano and listen while I practice at the range.

The final track is a 38 minute and 45 second subliminal track and it’s 55.7 MB. Scientifically speaking, you don’t have to consciously hear the words and affirmations for your subconscious brain to pick these up. However, to give you conscious assurance that there is actually something on the track and you aren’t getting ripped off by listening to nothing, Peter’s team gave the voice tracks a tiny bit of sound in order that you can consciously hear it if you turn it up loudly. I’ll sometimes listen to these while I’m working on my laptop, when I’m practicing, or even when I’m playing.

How do I purchase it and get started?

And, When You Get Access By Thursday, January 20 2022 You’ll Also
Receive: 5 Special All-Access Bonuses! 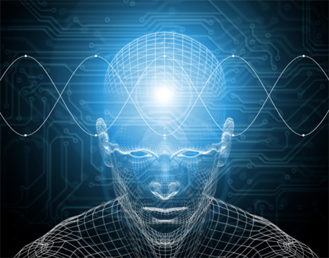