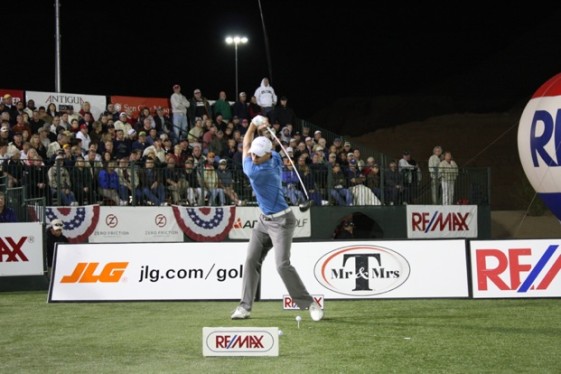 But even as he cemented his status at the pinnacle of power golf, Sadlowski was forced to share center stage with Long Drivers of America (LDA) Hall of Fame member Bobby Wilson.

Tumba, who collected $14,000 for his runner-up finish, earlier toppled top-seed Gerry James, 378-355, in one semifinal; in the other, Wilson squeezed past defending senior division champion Dan Boever, 358-357.

In one of the closest encounters on the evening’s card, the third-seeded Wilson nipped second-seeded Pat Dempsey in a memorable semifinal, 370-369. DeBoer had earlier bested top-seeded and two-time defending champion Mike Gorton, 338-330.

The tournament marked the 15th anniversary championship in Nevada. Power golf’s premier event was staged in Las Vegas in 1995-96, then moved to its home in Mesquite in 1997.

If you liked the article about Jamie Sadlowski and Bobby Wilson and you think it would help another golfer, please