Raising the Speed of What Feels Accurate

I do want to clarify one thing about swing speed training.

I’m not suggesting that you should swing at max speeds on the golf course. That’s not really a good idea. Rather, we want to raise your max speed so that your playing speed also goes up.

This is another cool thing you can use your radar to quickly test.

From the golfers that I’ve checked, it’s fairly normal to be able to keep control and go about 90-95% of your max speed. For me personally, I can control roughly 92% of my max. When I was testing PGA Tour player David Gossett, he was also at 92%. 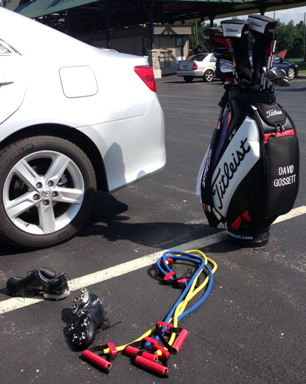 As an example, let’s say your max speed is 100 mph and your controlled speed is 90 mph…or 90% of your max. After a month of swing speed training, you can now get your max up to 112 mph. That means that you can now control…

Read the rest of what Jaacob has to say about Raising the Speed of What Feels Accurate in the April 2014 Monthly Handicap Improver here:
https://www.swingmangolf.com/register.php