Why You Are Wasting Your Time – Random Vs Block Training

One guy stands on the range; he has a 7 iron in his hand, an alignment stick on the ground and a bunch of balls next to him. He fires them off with amazing precision, flighting the ball towards his target like a heat seeking missile. He has a crowd watching in awe, as he repeats this in a robot like fashion. 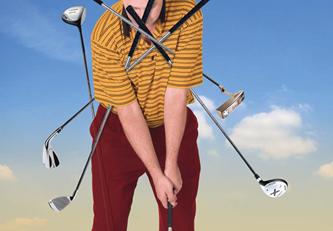 Next to him, is another guy. His shots are ok, but nothing impressive. He hits the occasional really poor one…and even his best seem to be lacking. He is standing back after each shot, changing clubs up, and going to different targets each time. No one is watching. No one is in awe.

It turns out that our two guys are best buddies, and they were warming up for a match play event together. They had been practicing for this occasion in the same way as above, for over a month now.

Later, at the 19th hole, our unimpressive practicer walks in victorious – he had won 6 and 4.

“But how could that be?” claims the cigar…

Read the rest of what Adam has to say about Why You Are Wasting Your Time – Random Vs Block Training in the November 2015 Monthly Handicap Improver here:
https://www.swingmangolf.com/register.php