What Is The Best Ball Position?

So where is the best ball position?

Well, it depends…let me explain.

First, it’s important to understand that the club isn’t going around in a vertical circle like a Ferris wheel does. Rather, we’re standing on the side of the ball, which means we’re swinging on a tilted arc. 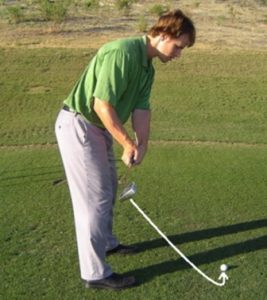 If you look at your swing from above, it will look something like in the picture below for a ball position that is back of middle and more towards your rear foot. 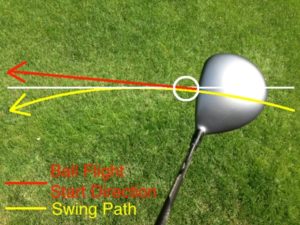 The white line is the target line. The yellow line represents the tilted arc that we are swinging the club on. The red line is the ball flight start direction. Note that the ball starts to the right of this target line on a centered strike on the club face.

Keep in mind the 3D space. Remember we are swinging on a tilted arc. Thus, as the club is coming down towards the ball, it is swinging out to the right of the white target line.

The club head won’t move along the white target line and start the ball out straight until the bottom of the swing arc.

Now, look at the reverse when we move the ball position up in the stance more towards the lead foot and target. 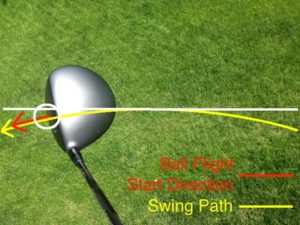 With the ball positioned more forward in the stance, the tilted swing arc that we are swinging on means that the yellow swing path is coming back inward, which means the ball will start left of this white target line.

In the beginning of my career, before I really understood this, it certainly made for some confusion and frustration in my game.

I remember one time in California I was playing my home course. There was a par-5 where I almost always needed driver and a long 3-wood to reach the green in two. To bring my ball flight down and get a bit more roll out of my 3-wood, I moved the ball back in my stance. But whenever I did this I would often miss the green straight to the right and I couldn’t figure out why…because I thought I was making my same normal swing. Indeed, I was.

Similarly, the idea of hitting up on the ball was gaining popularity and research showed that hitting up on the driver with a more forward ball position on a higher tee helped maximize distance. I tried it and whenever I would tee the ball way up high on a 4-inch tee with a forward ball position and hit it well, I could observe the ball carrying further. I didn’t even need a launch monitor to verify the extra distance. However, some of the drives would end up looking like straight pulls to the left of my target.

Once I got this concept, it really helped me out a lot.

So which ball position is better? Forward? Back? Somewhere in-between?

As often is the case in golf, it depends.

Most of golf instruction has us put the ball with our wedges around the middle of the stance and then as we work towards the longer length clubs, like the driver, the ball position moves progressively towards the target as far as the inside of the lead heel.

Some professional long drivers will even position their driver ball position outside of their lead foot.

This is fine provided you make the necessary adjustments.

For example, you could aim your feet a little left with the short clubs. As you move the ball position more forward as you progress to the driver, you could similarly progressively aim your feet more from the left to the right of the target.

This is effectively what Ben Hogan did.

Or you could make sure you are aware of the space and consciously swing a little more in to out with the driver and a little more out to in with the shorter clubs. Once your body “gets” the path it must swing on to hit the ball straight, it will eventually go more on autopilot. I’ve done this before and it can work fine.

Alternatively, if you want to really simplify things, you might just put the ball in the same point in space with all your clubs. In this way, no adjustments are needed. You set up the same way all the time with all clubs.

Most of the time you’d want to have this same ball position be around the middle to very slightly forward of your stance. It’s difficult to have it too far forward in the stance because, unless the ball is on the tee, it’s very hard to catch the ball on the upswing when the ball is on the ground.

You could also put the ball position back in the stance. In fact, for fun, I’ve even put the ball position outside my rear foot to see how low I could hit the ball. Be aware that doing this could cause an iron or wedge to dig in to the ground more easily. As such, precision ball-striking skills are critical for playing the ball way back in your stance.

As the saying goes, beware the man with one gun, he knows how to use it.

For consistency sake, you could also play the other clubs, like your woods and driver, in the same ball position as well. You can have a lot more consistency this way, but note that you probably won’t quite get as much distance out of your driver because, as I mentioned, it’s been shown you can get more distance catching the ball on the upswing with a more forward ball position (tee it high and let it fly!) versus hitting down with a ball position that is in the middle or further back in the stance.

There are ways around this, though.

First, it’d be wise to go through a brand agnostic custom fitting session for your driver to ensure you are getting the best possible launch conditions (launch angle and spin rate) for a slightly downward angle of attack.

Second, to get more distance to go with the consistency, you could work on your swing speed through programs available at places like Swing Man Golf.

This is the situation that the average Tour players is in. They catch the driver slightly on the downswing…but they have typically been custom fit and also have sufficient club head speed to still get enough distance to attack a long golf course.

Still another solution would be playing the driver with a more forward ball position to maximize distance and put all your other clubs in a middle’ish position for the consistency.

So, I suppose the answer is that there’s no right or wrong thing to do with ball position. It’s more just a set of pros and cons…and you can make a lot of different things work.

But if you understand a bit about what happens with different ball positions and the implications of moving the ball around, you’ll better be able to identify the ball position strategy that works best for you and your game.